Here we encounter four cards that we’ve already touched on as we traveled around the other faces of the Cube. They are Temperance (West Above), Strength (North Above), the Star (South Above) and the Lovers (East Above). At the center of “Above” we find the Magician card.

In the Book of Formation the edges, surfaces and interior of the Cube of Space were assigned Hebrew letters. As you may recall, each Hebrew letter is a number, a letter and a word. Sounds are identified by symbols called letters. Each of the 22 Paths, in this case the letters, is assigned a sound. God spoke the Word of Creation.

The Word is sound. We create our world using combinations of sound. The ancient Hindus with their Sanskrit language, understood this. Needless to say, the Ancients understood the Power of the spoken word to create and destroy.

After intense study and meditation, Paul Foster Case, founder of the Builders of the Adytum (BOTA), assigned the 22 Major Arcana cards, which he called Keys, to each of the 22 Hebrew letters. Prior to his work secret societies would assign Tarot cards to the various letters, but in many cases, according to Paul Foster Case, they would include blinds, designations that weren’t correct, in order to maintain and protect the secrecy of their doctrines from outsiders.

The 12 edges of the cube are made up of the Hebrew single letters, which represent constant forces and strife. These letters are attributed to the 12 signs of the Zodiac, each with a definite function, including the five senses.

The three interior Hebrew letters are called the Mother letters. They represent equilibrated forces and perfect harmony. They form the basic elements from which all manifested creation originates – Fire, Air and Water. Earth is the combination of these three.

By traveling to the Above face, as mentioned in Part 4, we are on the “Return to God” journey represented by the Gold key on the Teacher card. The Above face of the Cube is called the Path of the Master of Light.

So with our arrival on the top of the Cube of Space, called “Above”, we will look a little closer at the attributes of each of the Hebrew letters that we find there.

The “Below” face, which we’ll cover in Part 6, is the Path of the Master of Darkness. The High Priestess resides there. The experience of Above is the attainment of the height of all spiritual knowledge, wisdom and understanding while still in a human body. 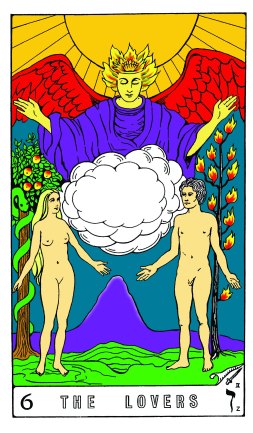 We begin our adventure of “Above” at The Lovers. The Hebrew letter attributed to the Lovers card is Zain. It represents the sword of discrimination, the power to perceive differences. This power is at the root of self-consciousness. It is only with the self-conscious mind that things are perceived as many apparently unrelated parts rather than as a single entity. This power makes things and conditions seem to be real in and of themselves. “All you see is all there is.”

The One Reality behind them is veiled. Their unified connection is also veiled. The doctrine here is that all such reflections that are changeable and impermanent are illusions, and in the absolute sense, unreal.

And yet! This power of being able to perceive differences, that is, to create illusions, is a fundamental necessity in order that individual self-consciousness may be manifested. Otherwise all would be undiffused substance, unperceived by anyone, in effect, without existence, having subsistence only! You will avoid any confusion that you may be experiencing right now if you remember: manifestation is simply the way the One Identity appears to Itself.

The instrument of Its self-perception is the faculty of the self-conscious mind in humans. This semblance of division are the two natures of the One. The nature that directs is the Magician, found at the Center of “Above”, and the recipient nature that creates is the High Priestess, found at the center of “Below”. And they are equally important.

This ability to discriminate is most valuable when man can perceive the difference between the real and the unreal. He moves from the dream of outer sense to the inner knowledge of his true nature. His inner spiritual senses are fully active. He sees all is connected while living in a world of amazing diversity. He realizes that to make any change in his body and his environment, that change must be made by his conscious awareness of Within. Here he functions as the Magician, acknowledging his Source of Power comes from within, not the outer sense-based unreality, and thereby creates a new world around himself. How this new world manifests is taken care of by the High Priestess.

The Lovers card is numbered 6, representing reciprocation. The Magician and the High Priestess work together and creation is made manifest. Reciprocation is a relationship between various parts of an organism. They are both within you. When you fully understand this, and reflect this in every cell of your body, you become a Master of Light.

Our next stop is The Star. The Hebrew letter Tzaddi attributed to the Star card means fish hook. A fish hook on this card is the designation, or agency, used to solve problems. It is also a means for discovering secrets, and receive revelation. This fish hook is a symbol for meditation. Patanjali defines meditation as “an unbroken flow of knowledge in a particular object.” The card’s number 17 consists of two digits 1 and 7. The power expressed is number 7, and number 1 is the agency through which that power is manifested. In Tarot the number 7 refers to the Chariot, meaning the receptivity that is indispensable for success in meditation. Remember, personality is a vehicle for the Life Force. Mankind is the transformer of his environment, but only according to his perception of reality. 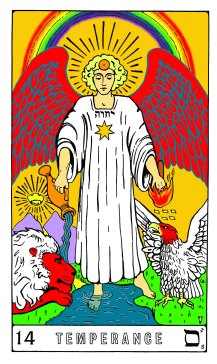 We now move on to Temperance. The Hebrew letter Samekh attributed to the Temperance card means verification, as both a verb and a noun. Theories must be established and supported by application. The number of this card is 14, meaning reason, number 4, expressed through the agency of concentration, number 1. The verification of hypotheses arrived at by the use of reason is carried out by means of concentration.

The digits of 14 add to 5, the number of the Teacher card. Therefore, the goal of verification is reached by carefully following the instruction given by the “still, small voice” of intuition.

Our next stop is Strength. The Hebrew letter Teth attributed to the Strength card means snake. It is one of the most important symbols used in occultism, the Great Magical Agent. This is a force that is used every day by everyone. It is the conscious agency that takes form as all created things.

In human personality it is called Kundalini, the Serpent Fire. Learning to control this Fire is part of the daily work of every student of the Ageless Wisdom. It is the Intelligence of the Secret Works. Works here means “wages” or “reward”. Make certain that what you do results in the desired result. The world is the disguise of this one thing – Spirit.

The number of this card is 8, which represents endless activity, rhythm and vibration. The motion of the Magical Agent is serpentine. These are also the lines of the Serpent Power in the human body going up the spine. In Christian occultism 8 is a symbol of the Holy Spirit. 8 is a symbol of the ancient doctrine that all opposites are effects of a single cause. A balanced reciprocal relationship between opposites results in harmonious activity. 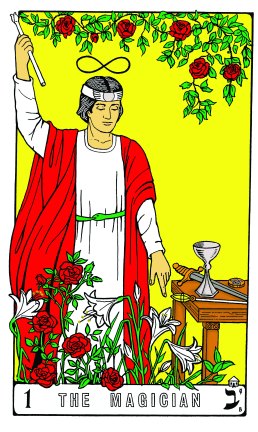 Let’s move on to The Magician at the Center. The Hebrew letter attributed to the Magician card is Beth. It means house, or a definite location used as an abode. Here it means a dwelling place for Spirit and refers to the human personality. This isn’t abstract. Think of your personality as a center of expression for your own Inner Self. Jesus said, “The Father who dwells within me, He does the works.”

The Teacher becomes the Master and realizes the full power found at the four edges of the Cube that we’ve just covered. Then by channeling the Power of Light, as in the Magician card, the Master’s word has the power to change the world. Beth is a double letter. It is pronounced two different ways. Its double letter meaning is life and death and is assigned to the planet Mercury.

The lower rates of the Mercury vibration, which limit our mentality to intellect, make our interpretation of sensations faulty, and cause us to think of ourselves as mortals, condemned to die at some unknown time in the future. Sublimated, redirected, and purified, this same Mercury vibration brings super-consciousness, which includes the certainty of immortality. This is the death of the false conception of personality. And this is the birth of the full realization of life eternal. You are the Master of Light. 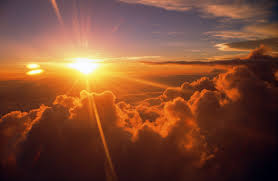