So, according to the Cube of Space, just how did we get here? The story goes that our body is conceived on the Lovers card at the edge of the Cube called East-Above. This “child” is called the Suspended Man.  It moves directly down from the Lovers card into and hidden by the womb of the universal mother, the Empress card. She is found at the center of the East face of the Cube. Mem is the Hebrew letter of the Suspended Man. The value of Mem is 40. So the “child” spends 40 weeks (approximately 9 months), developing in the mother’s womb. Amazing how these cards come together.

From there the “child” moves across to the center of the cube to the World card, East to West as the Suspended Man within the cube. Look at the diagram pictured above called Birth on the West Face. 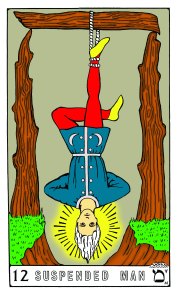 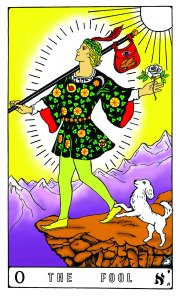 Meanwhile the Fool card, representing your higher Self, descends from above within the cube and unites with the World card at the Center. You once again take on a new mask, represented by the World card, and you are drawn to, and arrive at, the West face through the door of the revolving Wheel of Fortune.

There’s just one more tricky thing that happens. You’ve taken on the attribute of the Suspended Man, which is reversal. Look at the the Dancer on the World Key. It dances on its right foot, upright. Look at the Hanged Man. He’s suspended by his right foot upside down. This means that by the time you, the Higher Self, enters at the Wheel of Fortune door you have completely forgotten your past and your Inner Self. Yes, really! You take your first breath, the Breath of God, which enables your Inner Self to now enter into this new little body prepared for you by Mother Nature.

So here you are, ready to experience all of your spiritual potentials, but they are actually hidden from you. Just when you need them the most, just as you incarnate into this physical plane of existence you’ve forgotten everything! I have a feeling that you’re beginning to see where this little book called the Tarot comes in.

Many of the ancient sages would write how difficult it was to progress on the Great Work because they had to “start basically from scratch” each time they reincarnated. Though it would get much easier to progress with the more effort made each life time, and their ability to see beyond their current life became a reality, still a very, very long life became a goal of many of them in order to reach a level of spiritual perfection beyond this physical plane.

So, now you’ve arrived at the West face! Try to be upbeat! Just think, you’ve done this before.  The West face of the Cube consists of the Wheel of Fortune in the center. Below it is the Deceiver card, your next stop. The next card after the Deceiver is Transition, which is at the South-West edge of the Cube. And, sorry to say, most don’t get past Transition before they have to reincarnate again.

If you are able to get past Transition, then you move to Temperance at the West-Above edge of the Cube. As you can see, you are making a circle around the West face.  Your last stop on the West face will be your fifth stop at the Justice card on the North-West edge. From there you will travel on to the North face.

Now you know the logistics of getting around the West face. So let’s take a look at what’s actually happening there. Each face has a theme, particular obstacles to overcome, habits to change. A big part of your effort on the West face is just to get off it before you die! Seeing the Tarot as a road map can be very helpful. The Wheel of Fortune is your first stop, where your destiny, or karma is attached to you when you arrive. 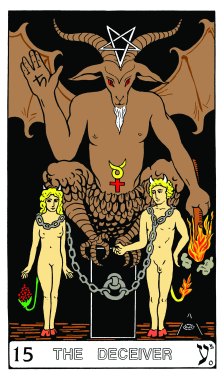 Your second stop is the Deceiver. Here you are fully asleep to your inner Self. All you see is all there is. You are chained to this deception, though at any time you can lift the chains. A review of this card would be in order. You are unaware of your real nature. It is this sleep that promotes every level of violence in the world, setting soul against soul. You are blind to the truth of the world; the living body of Light that joins us all.

If you are unable to wake up just a little bit, Transition awaits. Our inner lives, the most important aspect of living, is ignored or neglected. Through the third step at the gate of Transition you return to the dancer in the World at the Center of the cube and assume a new identity to travel the path of the Suspended Man once again through the door of Wheel of Fortune onto the West face.

But there’s hope. When at some point you begin to question the meaning of life and begin to have an overwhelming desire to commune with your inner Self, you will be able to advance to Temperance, the fourth step on the West face.  This test on the path of spiritual awakening is passed by acquiring the ability to see the blindness caused by all of the outward pleasures and distractions of the material world. Here you will find the Archangel Michael to help you along your way.

Your tendencies toward selfishness and indifference will be overcome by compassion for the human condition and your fellow man. Up to this point we have no idea that life has any real meaning, incarnation after incarnation. But we need both the Deceiver and the Angel to nudge us in order to move along our spiritual path. Again, a review of the Temperance card is in order at this point. Without all the suffering, resistance and pain we might not turn within for help. If you desire to pursue a spiritual path, the Angel will guide you.

Temperance is the verification card. The theories you have come up with so far need to be verified by experience. Application is the only way that you’ll know the truth; if you’ll know if something works. You have to be practical. You are beginning to transform your personality. It’s not all talk. It’s not an intellectualize exercise. You are realizing and beginning to live and govern your life by a new set of rules that sets you apart from most of your fellow man. The object of tempering is to impart strength. And you will need it to stay the course. This is the Hero’s Journey.

The direction of North-West edge is the last step on the West face. This will also become the first step of the Northern face. This is the gate to the North face of the Cube and Justice will bar you from it if you aren’t ready. Justice is the card of equilibrium and action. Here you begin to learn the principles of polarity. The Kybalion states:

“Everything is dual; everything has poles; everything has its pair of opposites; like and unlike are the same; opposites are identical in nature, but different in degrees; extremes meet; all truths are but half-truths; all paradoxes may be reconciled. To destroy an undesirable rate of vibration, put in operation the Principle of Polarity and concentrate upon the opposite pole to that which you desire to suppress.”

Faith is necessary to accomplish the Great Work. Without it you have nothing. You must have confidence in the principles by which you operate. Begin to study the lives of those who have gone before you on the Path. Live your life as they did. Use discrimination in your activities; remember to use the sword! And smile.

Remember, your first task is to get off the West face of the Cube of Space!

9 Responses to The Cube of Space – Part 1