I really love this particular diagram of the Tree of Life. It demonstrates what an amazing filing system this is. Here you have the 22 Major Arcana Keys, or Tarot cards, combined with symbols of the planets, the signs of the zodiac, which are illustrating all 32 of the Paths of Wisdom with their descriptions and references to the human body. You see the 10 numbered sephiroth (plural) in both English and Hebrew. Sephirah (singular) means enumeration, or counting. They are “numberings”, the many from the One. And all in living color!

How did God know that we’d all be walking around some day with cell phones or sitting in front of computers and using screens for TV, games and photos? How did He know that every time we go to use these devices we’d have to open a file. We click on a program, or icon, and search the files for what we want to look at, or play with, or create with. Even our daily calendar is in a file on our phone. And all our friends and photos are there, too.  And we use the Cloud, rather than file cabinets, to keep our files safe. Such an apt name, “The Cloud”, wouldn’t you say?

We learn about God and our Path of Return to Him through a system of files called the Cabala. It was created a long time ago, but we’re now catching up on a grand scale. At the turn of the century we entered the Age of Aquarius – love, brotherhood, unity and integrity. This age is also strongly linked to technology and communication.

The file system that the Tree of Life refers to is inside of us, closer than our hands and our feet. So as we learn about using files in our everyday lives we can take that awareness and use it in the discovery of what is going on within ourselves. We don’t have to do it all at once. We can look at just one file at a time. If you’ve been reading through my comments on the various Tarot cards you may have realized by now that each one deals with either a different aspect of your life or how to conduct it such a way that whatever life throws at you, you’ll land on your feet (or know how to duck in time), and even more so, the opportunity of a joyful life is quite possible. 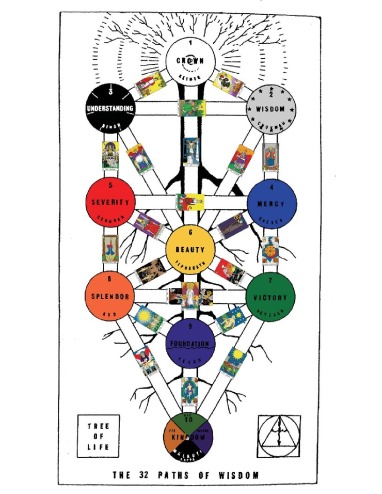 As you can see, all of the Major Arcana Tarot cards are on the Tree. Of course the placement of the cards on the various Paths is important, just as the placement of symbols on the cards is important. The meaning of the Hebrew letters on each of the cards is marked on the Paths. For example, the Hebrew letter Beth on the Magician Key means house. Look at the purple Path between the Sephirah #1 and #3. Next to it is the Magician. On the Path you see the Hebrew letter for Beth, the word House and the number 11, which is the Path number.

Let’s look at the 10 Sephiroth, or Spheres. They are the building blocks of the Tree and therefore the first ten Paths on it. The remaining 22 Paths have the Tarot Keys on them and are the lines between the Spheres. The Spheres stand for 10 aspects of God. In discussing the cards I mentioned that in this system there is a saying, “As above, so below.” So when you look at and think about the 10 Sephiroth, you are actually looking at your Self. That is, the part of you that is one with the Divine, the part of you that you’ve forgotten about (but nags at you from time to time), the part of you that you are now getting to know better. And the more you get to know this part of yourself the more lovely your life will become. 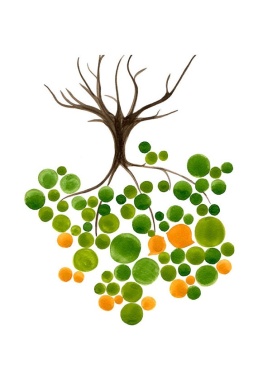 The Tree is actually upside-down. The roots are at the top and the fruit is at the bottom. This expresses the idea that a spiritual life can only be rooted in that which is above us in consciousness. This is not the physical sky, but the finer, subtler areas of the heaven worlds from whence we come. Thus “above” is identical with “within”. The physical manifestation of the Tree is its fruit, which can be seen in the world of the four elements where we currently reside.

Beginning at the top, these Sephiroth, or Spheres, are called the “progressive materialization of Ideas in the Mind of God.” They all show stages of God’s Creative Evolution. On the Way of Return from the bottom of the Tree to the top, as man lifts his consciousness to a higher level, His Presence is revealed more and more as man draws closer to his Source. Around the fourteenth century a book call The Book of Formation was written on the Cabala. Prior to that this tradition was only passed on by word of mouth.

One of the translations of the Book of Formation is by Knut Stenring. In his notes he wrote: “The 32 Paths of Wisdom are 32 notions which comprehend the whole creation. Under these fundamental ideas all that exists is classified. When God wrote a Number or a Letter, in each of these paths forces were created from which everything was formed. By means of their symbols – otherwise known as Numbers and Letters – these forces became apprehensible to the human mind.” They act as 32 different aspects of awareness of One Single Reality, each a different expression of One Whole.

In The Book of Formation the Tree is described: “All Ten are eternal, and they are the Substance of all that is – the Form to be supplied by the twenty-two letters. They represent the contrast between substance and form, and creation must resolve that contrast with God as the solvent. In this Way, Existence, or the combination of form and substance, takes on reality.”

Numerically, the Zero doesn’t represent one of the Spheres, but rather the background of the whole Tree, and thus the Absolute, or Nameless Root of all manifestation. 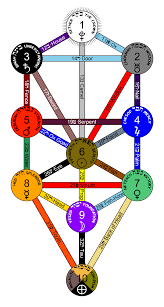 The first Sphere is called the Crown (Kether in Hebrew) and it symbolizes the mystical point, or First Force of Whirling Energy, at the center of a circle. Here we have the focusing of Power and the beginning of all things.

The second Sphere is called Wisdom (Chokmah), the second power of God. It is located at the top of the right Pillar and represents the Father Principle in Creation. It is the beginning of polarity.

The third Sphere is called Understanding (Binah), the third power of God and, thus, the third point on the Supernal Triangle, which consist of the top three Spheres. It is the Mother principle in all Nature. It is at the top of the left Pillar of the Tree. As the Life Force begins to limit Itself energy condenses itself and marks the beginning of generation. The remaining 7 Spheres, numbered 4 through 10, come from here. They represent the seven days of creation.

The fourth Sphere is called Mercy (Chesed), the fourth power of God and represents Cosmic Memory looking back to the Source of all. It represents power in action and demonstrates beneficence, mildness and might. This is the first day of Biblical creation.

The fifth Sphere is called Severity (Geburah), the fifth power of God. This represents the operation of Cosmic Law, which may seem severe if you are acting contrary to it.

The sixth Sphere is called Beauty (Tiphareth), the sixth power of God. It represents the Cosmic Sun/Son and Divine Love. It’s at the center of the Tree and thereby represents harmony, symmetry and balancing of all opposites. It is also the Mediator between the archetypal worlds above and the human realms below. It is the point of the second triad which is the reverse of the first and thus reflects it.

The seventh Sphere is called Victory (Netzach), the seventh power of God. Here we have mastery through Victory over the desire nature. This is the area of Venus and emotions. It is the fourth day of Biblical creation.

The eighth Sphere is called Splendor (Hod), the eight power of God. It represents the Intellect. It balances with Victory opposite and relates to vibration and infinity. It is the realm of Mercury and the Hermetic teachings.

The ninth Sphere is called Foundation (Yesod), the ninth power of God, Omnipotent. Here we have the astral and lunar realm of the formative state of consciousness, the automatic consciousness, and the heaven world.

The tenth Sphere is called Kingdom (Malkuth), the tenth power of God and outward manifestation of creation, or kingdom of heaven established in the world of the four elements. On the diagram they are fire, air, earth and water. The number 10 indicates the completion of a cycle, ready to start over on a higher level, always moving in a spiral fashion, and evolving upwards.

This is the last of the seven spheres, numbered 4 through 10, which emanated from Sphere 3 above called Understanding. Thus, we have also arrived at the 7th day of Biblical creation. It all ties together on one neat little diagram!

In a nutshell, there is a game plan for getting back to God, aka The Return. It is the Hero’s Journey. The diagram is a brief outline of the various components that we will go through on the Path of Return. Each of the 22 Tarot Keys helps us to understand the work that lies before us, the hurdles that we must overcome, the recognition we must acquire of who we really are. This is a Path of remembering ourselves and our great inheritance, waiting for us even now. 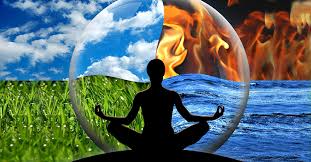 You have many tools at your disposal to effect change in your life. Developing the ability to quiet your mind, to allow yourself time to meditate in the midst of a busy life, to maintain a healthy body, and healthy thinking is very important. The doors will open for you if you allow them to and give them space to do so. It can be very difficult to make changes in your habits, but if you really want to, one step at a time, the entire cosmos will come to you with open arms and bring you home.

3 Responses to Tree of Life