Our story continues with the 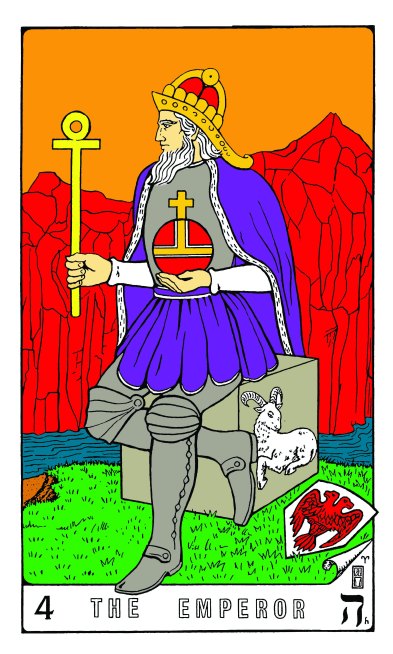 introduction of the Emperor, Key 4. The Empress is his consort, which is the term used for the wife of an emperor. As you recall the High Priestess was transformed into the Empress when she became active. In the same way, the Magician is now transformed into the active Emperor. He is the father of her children.

The title Emperor means he is a sovereign ruler of great power and rank. Here we find a Key which represents order, reason and manifestation. It implies both authority and paternity. Implied is that he represents the source of war and war-making power. As we look at the symbols on the card we immediately see that it is representing the sign Aries,  ruled by Mars and the Sun. Let’s explore this Key further.

The Hebrew letter assigned to this Key is E, or silent H, Heh. The letter’s value is five. It’s pronounced “hay”. This Key is on the Path of Wisdom 15 The Constituting Intelligence. To constitute is to establish or create, to make manifest in the material world. In our case it would be to learn how to create your life and not be tossed about by the winds of fate.

The letter Heh means window.  The function of this Key is sight. A window admits light and air into the house. As an extension of this, a window is a vantage point for overseeing all of our surroundings. As a result of this vantage point we are able to perceive and begin to create order and control over our personal universe. After examining all that surrounds us, we learn to refine, improve and cleanse our vision. This is accomplished by looking within Mother Nature and within ourselves. The Tarot instructs us on how to go about this this.

Rather than merely looking at things around you, the Tarot teaches you how to allow them to speak to you, to guide you. You begin to see things as they are beneath the surface, not just as they appear. Rudolf Steiner delves into this in a very practical way in his book “The Way of Initiation.” He discusses the need to develop feelings that will awaken our five inner senses of sight, hearing, touch, taste and smell. According to the quality of our vision we define and create ourselves, and our environment. Remember that the Emperor’s consort is the Empress. She will eagerly make for you whatever you wish. She’s pregnant. Be careful and clear what you wish for. She will provide it in abundance! If our perception of our surroundings is based upon their appearance only, then what she creates in your life will be truly superficial, possibly terribly boring, and may even destroy you. This ruling monarch represents your own true Self, who must take steps to establish its dominion through clear sight.

Astrologically the Emperor represents Aries, first sign of the zodiac which begins the fourth month of the year. Symbols of Aries are evident throughout the Key. The ram is a symbol of Aries, acting as leader of the flock. On top of the Emperor’s helmet is a solar disk. Aries rules the head, which exercises control over the whole body through the brain. The Sun is exalted in Aries as shown by the gold trim of the helmet and globe, the metal of the Sun, and by the orange color of the sky, one of the colors assigned to the Sun. Again we have an indicator of high office.

Aries is ruled by warlike Mars so the Emperor is wearing armor. Behind the Emperor are cliffs of bare red rock, the color corresponding to Mars. So we have here bare, hard rock behind the Emperor, yet Red is used to express fiery activity and creative energy. Expressed here is that an Emperor cannot rule just by stagnant rules, judgments  and regulations, but needs insight from Mother Nature to rule with reason and love. Note that behind him flows the stream from the High Priestess, which dilutes his judgement with mercy, and from which he receives the memories held by the her. This stream gradually erodes the red rock and combines with it, forming the new earth that the Emperor sits on.

In his right hand is the Egyptian Ankh, a symbol of Venus and the Empress; he rules with love. Her color, the green of nature, forms the ground upon which he rests, balanced and poised. The 10 small circles on his helmet refer to the 10 Sephiroth on the Tree of Life. The Tree of Life illustration at right is from Paul Foster Case’s book The Tarot, a Key to the Wisdom of the Ages. On the Fool card we found out that a robe or cloak represents protection. Here his cloak is violet, a symbol of royalty and is the color associated with Aquarius. Aquarius rules Key 17 The Star, whose function is meditation and revelation of truth.

The sphere in his left hand is a symbol of dominion. It’s red and on it is an inverted, gold T. The Hebrew letter Tav is the last letter of the Hebrew alphabet and is ruled by Saturn. Saturn’s influence is to create limitation. Here we have that limitation reversed. Through correct reasoning and truth we are set free. This includes accurate understanding of the messages received from the material world aka Mother Nature. The cross on top indicates the four elements of Fire, Air, Earth and Water.

The white shield on the ground refers to purity of spirit, with its five sides reminding us of the 5-pointed star representing uplifted mankind. The double-headed eagle on the shield suggests initiative, swift creative energy, and regeneration. The two heads indicate equilibrium or the balance of opposite forces.

His legs are posed in the form of the number 4, or a cross, but the posture of his whole body resembles the symbol for alchemical sulphur, a triangle above a cross. That is, the Law of the Triangle is standing above and triumphing over the cross of the material realm. The Law of the Triangle is how Creation manifests through the first three Sephiroth at the top of the Tree of Life.  Alchemical sulphur suggests those passionate fires which both tempt man to turn aside from the spiritual path and to burn the dross from his being.

Order is achieved with the help of reason – the two principle functions of this Key. Use this Key to strengthen the pattern of order and control in your own life. Whenever a new condition of any kind enters your life, take immediate steps to put it in its rightful place. And remember, any attempt to put order in your life must begin by establishing order in your thinking. How do we organize the flood of vibrations received by our senses? The interpreter is Chokmah, in English Wisdom, and the beginning of polarity on the Tree of Life. This creative faculty of creating order in your thinking, of using discrimination to interpret what we receive, is derived from the Emperor.

The manifesting result from Chokmah’s interpretations received from our senses is created by Binah, in English Understanding or Intelligence, the Mother Principle of all Nature on the Tree of Life. There the condensation of energy starts, with the creation of form, and the beginning of generation. The divine name for Binah is Elohim, which means “One that is also Many”. From Binah come the remaining seven Sephiroth on the Tree. The Tarot and the Cabala teach that God is both male and female at once. This is also a Hindu idea. In the Cabalistic tradition, the masculine and feminine elements are in a state of perfect balance within you. The Emperor is challenging  you to find that Balance, that Unity, and set yourself free! 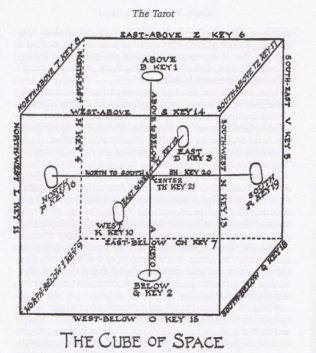 The Emperor rests, on a stone cube, as does the High Priestess and the Empress. The word stone in Hebrew is EBEN, meaning father-son; thus they are one. The cube refers to The Book of Formation, Sepher Yetzirah, in which the esoteric teaching is that the manifested universe is represented as a cube, with its western and southern faces visible to the observer. The six faces of this cube and its interior center are assigned to the 7 double letters of the Hebrew alphabet. The three interior coordinates correspond to the 3 mother letters. The twelve boundary lines represent the 12 simple letters. We will be exploring the Cube of Space and its fascinating symbology at the end of our review of the 22 Keys.

The Emperor is a benevolent figure. We see him in profile, and therefore only see his left eye. It’s considered a reference to the all-seeing eye, or Eye of Providence found on the dollar bill and in several cathedrals in Rome. It represents the Eye of God watching over humanity (the concept of divine providence). It also expresses our ability to see within ourselves, to actually see the Self within.

Keep an eye on things all the time; stay awake! Your life is eternally being invaded by things that don’t belong there at all! The first thing that you want to do is shut the door. Look out the window, but don’t necessarily accept all that you see. The law of life is rule or be ruled. I don’t recommend letting someone else rule your life, but that’s your choice. Get to know the Emperor and by this accept spiritual responsibility for yourself.

From the Emerald Tablet: “and thereby all obscurity shall fly from you.”